I spent last weekend at Geek Girl Con. For those of you unfamiliar with it, here is the description from their website:

GeekGirlCon celebrates and honors the legacy of women contributing to science and technology; comics, arts, and literature; and game play and game design by connecting geeky women world-wide and creating community to foster continued growth of women in geek culture through events.

I wanted to write up a summary of my weekend, for a variety of reasons, but mostly because several of my friends asked me to since they weren’t able to join me. 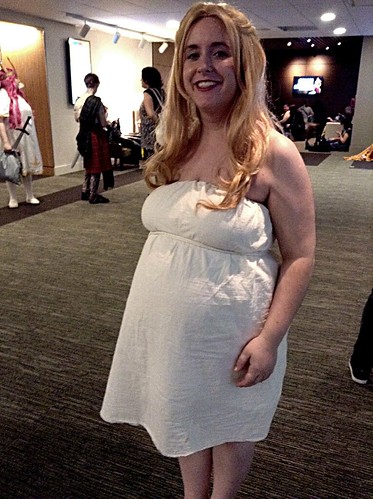 Saturday morning I was on a panel with four other awesome humans. It was described as a discussion about the distinction between sex and gender, positive and negative examples of trans and non-binary characters, and where we can go from here. My fellow panelists were Raven Oak, Janine Southard, Winter Ellis Downs, and Fran Stewart. Four of us had gotten together a few weeks earlier to chat about what we might discuss. We talked for three hours, so you can imagine how quickly 50 minutes went by.

We were asked what first changed our concept of gender. For Fran, it was Warriors of the Wind, which was an edited version of Nausicaä of the Valley of the Wind. For Winter, it was music. Annie Lennox, David Bowie, and then Britpop bands like Suede. For me, Ursula LeGuin’s Left Hand of Darkness. Raven grew up with limited exposure, and it wasn’t until she had a friend with gay parents who introduced her to the world of science fiction and fantasy that her ideas began to change. Janine spoke of growing up as a theater kid, where the rules of engagement were based on different rules, so she didn’t realize that there were more rigid ideas of gender.

Fran pointed out that cyberpunk was about being dizzied by technology. She wants some genderpunk stories, where we can be dizzied by gender. I would love that, too! She also talked about the show Steven Universe, which is delightful, and if you haven’t watched it yet, give it a try. Fran pointed out that while the characters have apparent genders, they don’t end up being restricted by them, nor do they seem to matter to anything. The main character is a chubby little boy who values harmony. He’s half gem, his powers are pink and decorated with flowers. Connie is a human girl. She’s learning to sword fight, and she’s quicker to take action. Steven is more often in a support role. The gems themselves are ostensibly female, and they have romantic relationships with one another.

Winter talked about Greg Egan’s book Distress, which has seven genders. They found it problematic, in that each gender comes with its own roles and expectations.

The comic book Loki: Agent of Asgard does a good job of depicting gender variance in an individual, rather than attempting to deal with it on a societal level.

We took questions from the audience, who also made several recommendations including the following webcomics:

There was also mention of the tv shows on Netflix, Orange is the New Black, and Sense8.

While this didn’t get mentioned at the panel, the Tiptree Award was specifically created to recognize work that “expands or explores our understanding of gender.” Go check it out for the list of winners, as well as the long list. I’m sure there’s enough to keep you busy for quite a while.

So, that was the panel. Since this post is getting longish, I am going to break the rest into one or two more entries. Oooh, look at me, building suspense. You might almost suspect I was a writer!

I’m listing the titles here as suggestions for further reading. I haven’t read or seen most of them, but I do encourage you to check them out. If you have recommendations for cool stuff and how it presents gender, please leave a comment!