In the spring of 2001, my girlfriend took a trip to France. At the end of her visit, she called me from Paris and asked if there was anything I wanted. I told her I didn’t want anything, but she kept bugging me, so I told her to get me an Hermes scarf.

One thing you should probably know at this point. In French, Hermes is pronounced differently than in English. English speakers are more apt to say something like “her mees”; but in French, it is pronounced like “air mez” or “air may.” I explained to my girlfriend this difference, so if she asked someone, they would understand her. In my experience, not using the French accent on a word means that no one will understand you, even if the word is essentially the same, like “vegetarian” (true story). On the flip side, I couldn’t understand a French speaker saying Richard Chamberlin’s name to me, so I have complete sympathy for pronunciation.

Back to the scarf. I really didn’t want anything, and I told her to get an Hermes scarf because a) I knew they were super expensive and when she saw the price she would balk; and b) I find their scarves aren’t really to my taste.

It was J’s last day in Paris, and it was a hot day. She wore a tank top and shorts and carried a backpack. Nothing terribly glam. She and our friend went to Le Bon Marche, a department store. J searched the store, trying to find an Hermes scarf, but had no luck. She is fiercely independent and doesn’t like asking for help, but finally reached the point where she had to.

She found a saleswoman and asked her if she spoke English. The woman said she did a little. J stumbled through her request, her self-consciousness over the pronunciation adding more stress. J murmured to the saleswoman, “I’m looking for a scarf. We say ‘Her-meez’ but I think you say ‘Air-mez’.”

The saleswoman didn’t understand what she said, so she asked her to write it down. J did, and when the saleswoman turned the paper around to read it, her demeanor changed entirely. Where she had been brusque before, now she was solicitous and friendly. She said, “Oh no, we don’t carry those here. But let me go ask someone else and I’ll find out where you can get them.” It turned out that the Hermes store was closed by the time J got there. I was spared her spending any money on a scarf I probably wouldn’t like, and even better, we got this fantastic story!

Which brings me to March 2015. Last year my mom gave me money for my birthday to buy an Hermes scarf, in part motivated by this story. In the pit of my stomach I was sure I wasn’t going to find any scarves I actually liked. I looked at their website, but it was so awful and I couldn’t figure out what they might look like. I kept putting off going to a store. I really wanted to go with my mom, so we could share the experience, but our only chance to do that was last summer, and there ended up not being any time.

Last week I made plans to meet up with my friend Lauren, who lives on the Eastside, because I had something I wanted to give her. I decided to combine meeting her with a shopping trip, since there’s an Hermes store over there. Saturday was a cold and dreary day. I headed out in the rain and dodged the raindrops. Since I don’t have a car, I took the bus over. 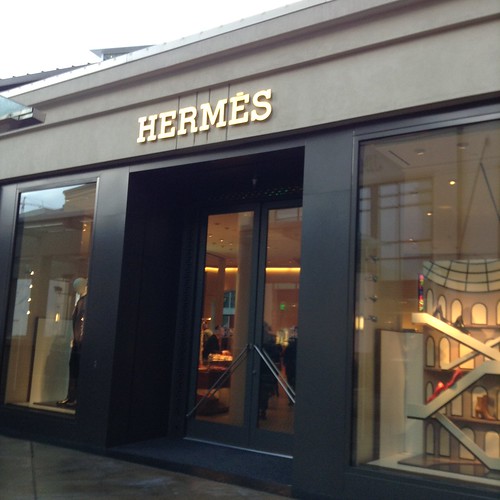 Bellevue is very different from Seattle, even though it’s separated by a small body of water. The Hermes store is in a high-end/designer shopping center. Everything there is so foreign from my daily life. It’s hard for me not to be super judgmental about all of it. I arrived at the store around 3:30, expecting that it wouldn’t have many customers. How wrong I was. The small space at the entrance was filled with women who surrounded the scarf case. They were throwing scarves in the air, one after the other, gesturing and talking loudly. In retrospect there were probably about five women, but it felt like twenty! I stood in front of the case amidst the melee for a good five minutes, hoping that a salesperson would appear out of the fray, but none did. I finally went over to a young man standing to the side who wore a suit. He seemed to be a cross between a security person and concierge, and I asked him if he could help me find a salesperson. He welcome me to the store and then apologized profusely for me having to wait.

A salesperson was procured and began helping me. She started by asking me if I wanted a classic scarf, etc. etc. I asked her about the size, because I don’t understand centimeters. Then she took me back to the case and asked me about colors and what I was looking for, what colors I liked, etc. I told her pinks and reds, even though before I got to the store I was thinking I wanted something with blues and greens. I don’t know why I didn’t just say that. I was so overwhelmed by the frenzy! She pulled out one scarf and tied it around my neck. I looked in the mirror and didn’t feel anything. I pointed out another scarf that had a cheetah on it, with bright pink splashes. The saleswoman said, “Let me get that before it gets snatched out from under us,” but that also produced a meh reaction when I looked in the mirror. You can torture yourself by trying to figure it out on their site. I can’t even find the scarf I ended up buying.

While I was feeling meh and overwhelmed and starting to get a little fed up with the whole thing, the saleswoman came back with something totally different. No pink or red at all. It had a giant tiger with a green background and these bright, lush orange lilies. 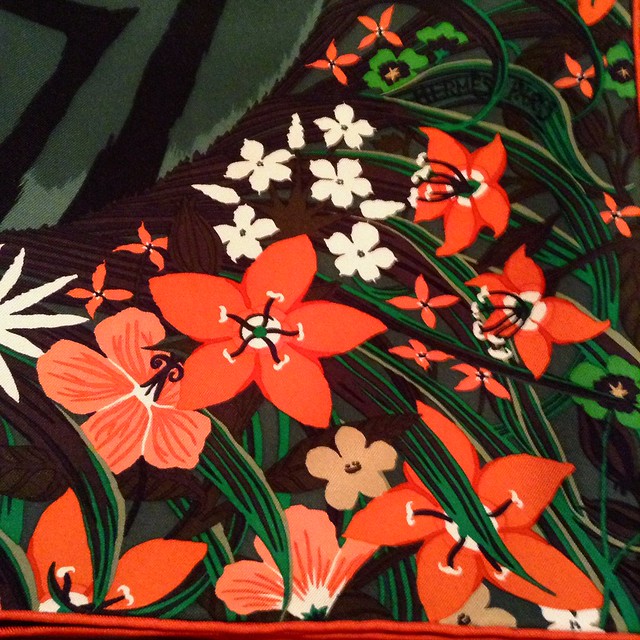 Some people know I’m not a fan of green. I don’t really wear it that much. I don’t gravitate toward it. I will pass it over for pretty much any other color. But I have a thing for lilies, and so I decided why the hell not? She tied it on, and I looked at the mirror, and something in me sang out. I told her, “This is the one.” She showed me five different ways to wear it and was super willing to show me other scarves, but I just knew. This was it. No matter what else I saw, it wouldn’t please me. 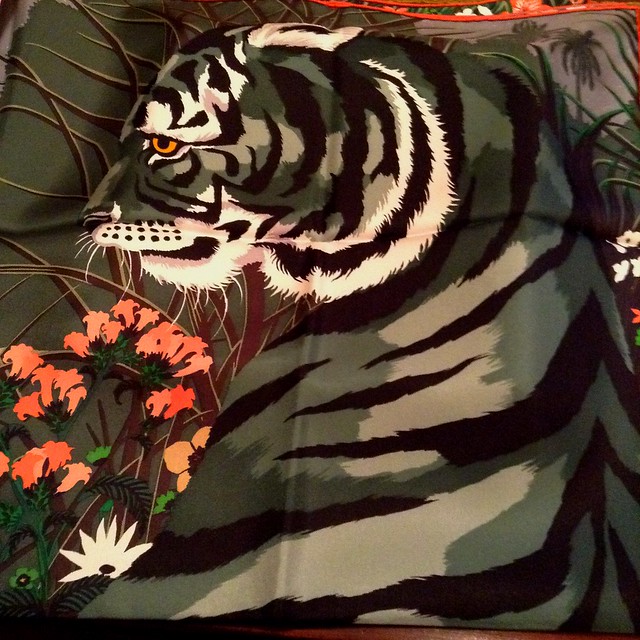 She rang me up and I left the store, feeling completely triumphant. When I got home, I posted a few pictures of the details on the scarf, including the one above. And when I was taking the pictures, I saw that it has the line from William Blake’s poem: “Tyger tyger burning bright in the forest of the night” … which you can just make out here: 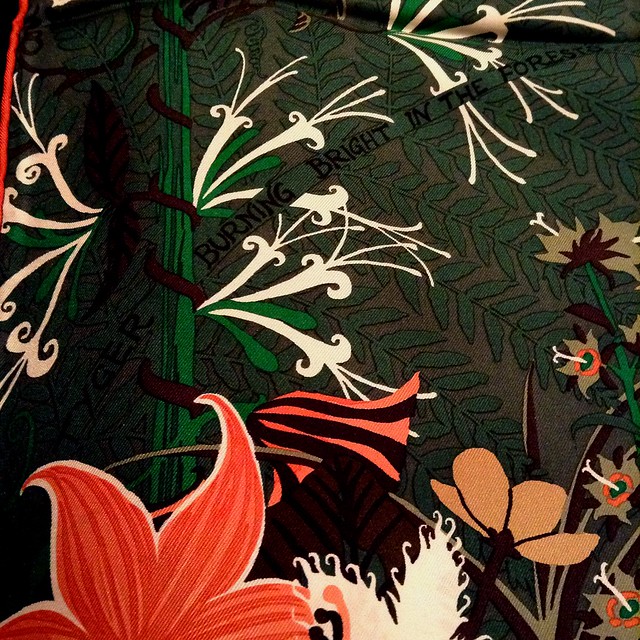 That line also has a special resonance for me (and possibly for many people), and was such a delightful surprise. On top of that, a friend posted this lovely piece about the symbolism of the tiger:

The confidence of the tiger is contentment. Contentment comes from discernment, the virtue of touching our feet to the earth of every moment. As we slow down and consider our thoughts, words, and actions with the question, “Will this bring happiness or pain?”, we become like tigers who carefully observe the landscape before pouncing. In looking at what to cultivate and what to discard, we are remembering our precious human life and deciding to use it well.

And that perfectly sums up the theme of the work I did with my therapist, so now this scarf has become a talisman for me, too!