Apparently I missed the deadline, but I’m still going to post here. Last week’s them runs the green gamut. Here are a few from the archives, plus one I snapped while at my writing retreat in the rainforest last week. And a little bit of a cheat, Marigold Melange from the shop “Marigold and Mint”: This week’s prompt, in honor of Valentine’s Day, was hearts. I collected quite a few in a Flickr Gallery, but I’m going to show you a few of my favorites here.

I left my heart in San Francisco:

Temple bells, heart clappers. I took this picture in Chiang Mai, Thailand. It was quite common to see bells with the hearts hanging from them, like this: A string of bleeding hearts, which always remind me of our neighbor Esther, from when I was a child. Esther had a Hummel collection, and she told us if we touched the dolls, our fingerprints would stain them. She also had bleeding hearts in her garden. Hearts (and bones) loteria at the little Mexican shop on Broadway, on Capitol Hill: And this coração on a wall in Lisbon, Portugal: 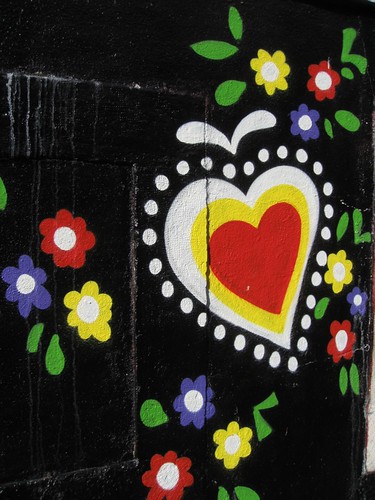 I have to admit, I was having a little trouble with the prompt this week. And then I started looking at my pictures from Yellowstone that I took last summer.

I LOVE this one of the wavy orange bacterial mats in the Grand Prismatic Spring disappearing into the fog: Here’s the same spring from a higher (and clearer) vantage point: This pinecone, with its zigs and zags: And finally, these burnt snags, pointing into infinity, but not straight away: