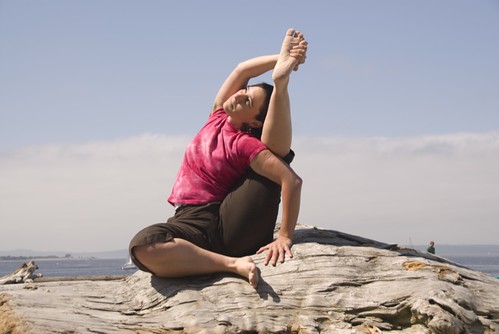 I talked to my therapist today about what enables good writing for me. What it boils down to is not letting my mind get pulled by the distractions. And wooo buddy are there ALWAYS distractions.

I chose to focus on writing for ONE HOUR this afternoon. Just one hour. Just after I’d turned the timer on, I swear to everything holy a car alarm started going off. I had to laugh. I could let myself be distracted by the car alarm, or I could choose to focus on what I wanted.

Here’s what I want: I want to immerse myself in the world and characters I’m creating. I remembered what I wanted. And every time the fucking car alarm went off again (because oh, it did), I heard as a reminder to return to my focus.

I’m grateful for the years of practice I’ve had at meditation. I’ve learned that every moment is an opportunity to return to what I want to focus on. I don’t have to shame myself for getting distracted. I can just return. And so I do.

What are you choosing to focus on these days? For the last two months my yoga teacher Rainey was using the koshas as the lens for our yoga practice. The idea is that there are five of these sheaths or layers, and the innermost one is the anandamayakosha. Ananda is often translated as “bliss”, which I find very difficult to access. I will get back to this in a moment. Rainey likes to translate it as “unreasonable joy” – that is, joy that is unbounded, unconditional, without any cause. And even that is hard for me to get to. I’ve been working with the idea of satisfaction, rather than bliss, joy, or happiness, because it’s much easier for me to be clear about whether or not I’m satisfied. And often, satisfaction brings contentment, which is a flavor of happiness/joy/bliss. I love that in French one says Je suis contente to say, “I am happy.”

That is the foundation. Rainey suggested at the beginning of a class what we might do to reveal that innermost kosha, so that it remained undiminished. I have been working the last several weeks on noticing when I’m telling stories (which are often lies) about my own experience. I often skip feeling the emotion and go right into interpretation and storytelling, which ironically has the effect of keeping me in that feeling (and is often downright unpleasant). I realized that when I can let go of the story about the feeling and just experience the feeling, it dissolves rather quickly. Pema Chodron explains it this way:

When you give your full attention to your knee or your back or your head—whatever hurts—and drop the good/bad, right/wrong story line and simply experience the pain directly for even a short time, then your ideas about the pain, and often the pain itself, will dissolve.

It is the stories I tell myself that create the struggle (c.f. first paragraph on “bliss”). When Rainey said undiminished, I heard in my mind undefined. Can I just let my experience be, without telling any stories around it? And can I find that satisfying? And will that reveal that inner joy/satisfaction/bliss that much more? I’ve been feeling low-energy this week. Yesterday in my yoga class, my teacher asked if I would demo kicking up into handstand with a partner. I felt extremely depleted, but I agreed to try anyway. Despite not feeling full of energy, I made it upside down. This is the only way I’ve ever been able to get into handstand – with support. I have been practicing yoga for over a decade. And handstands have been on the menu for just as long. Some of you know how much fear I have with this pose.

“No effort is wasted.” My yoga teachers say this all the time. There is also the concept of a “lifetime pose” – as in, it may take a lifetime to get there. I’m not sure in which lifetime I will get over my mental blocks and kick up into handstand on my own, but I’m certain I will surprise myself so much I will fall out and have to do it again.

I judge myself against my classmates, many if not most of whom can kick up on their own. I wonder what is wrong with me that I am not like them. But the reality is, I am not them. Each of us has her own struggles. I do know that over the years, my relationship with this pose has changed in subtle ways. There have been small and subtle shifts, perhaps like the movement of the tectonic plates. I trust in the process and recognize that even if these changes aren’t visible, they are still happening.

Yesterday, after I demonstrated kicking up into handstand with support, a classmate approached me and said, “I aspire to do what you just did.” Wow did that expand my perspective. We are all on a continuum. We all struggle. Only some of us keep coming back and making the effort.